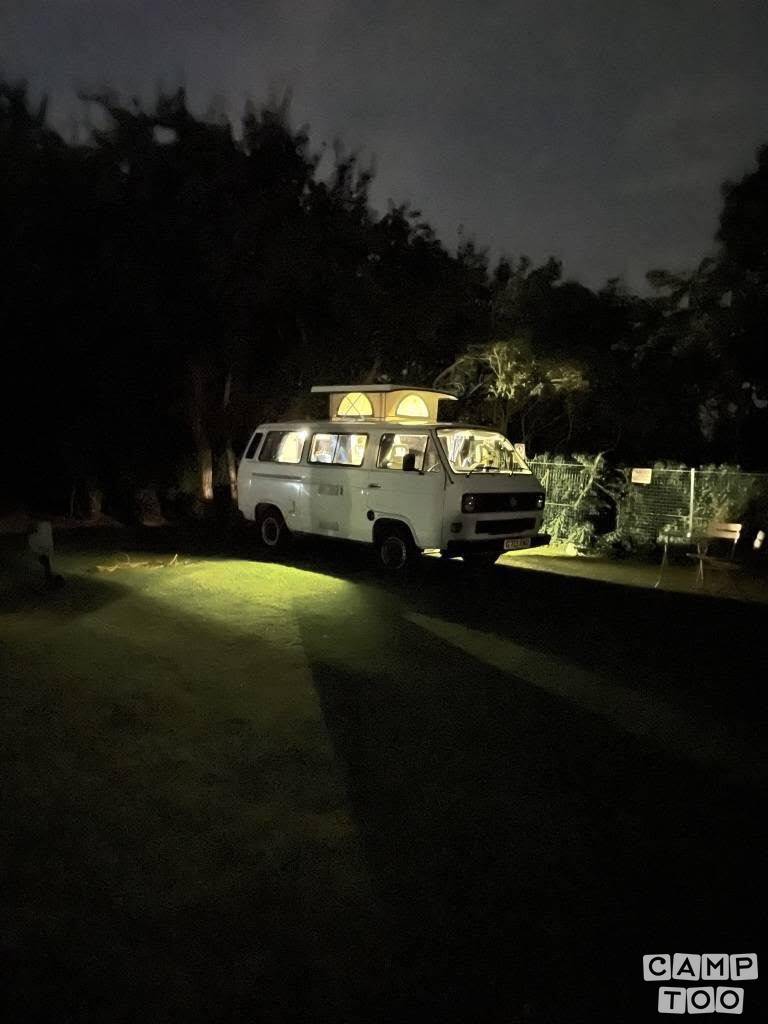 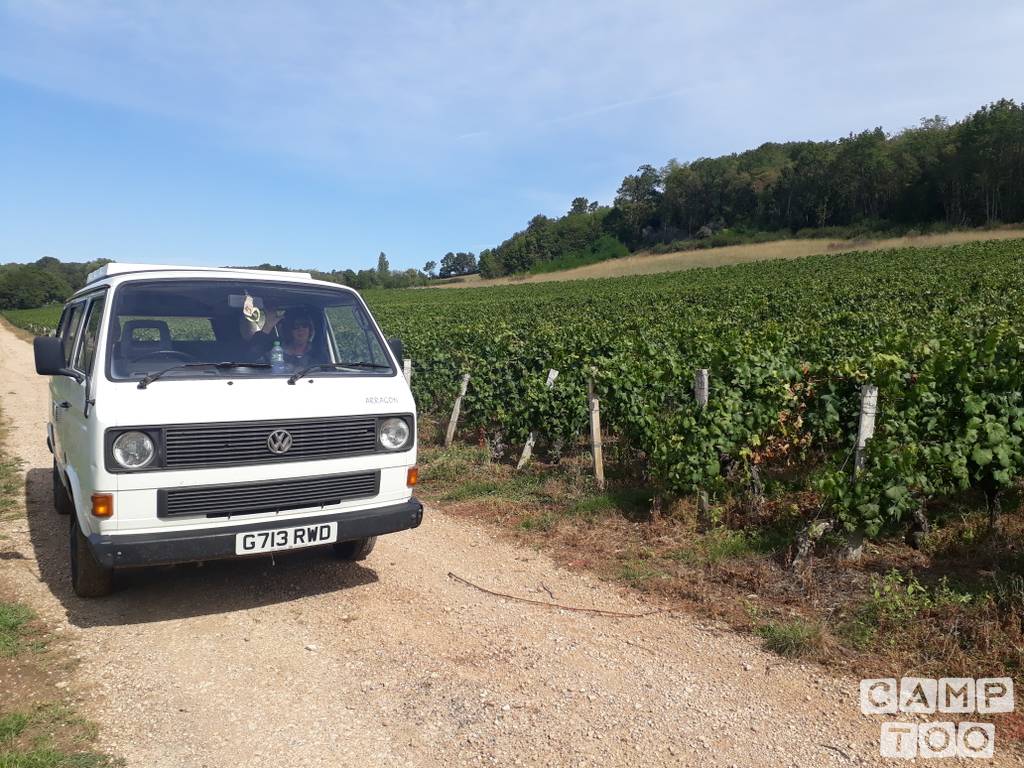 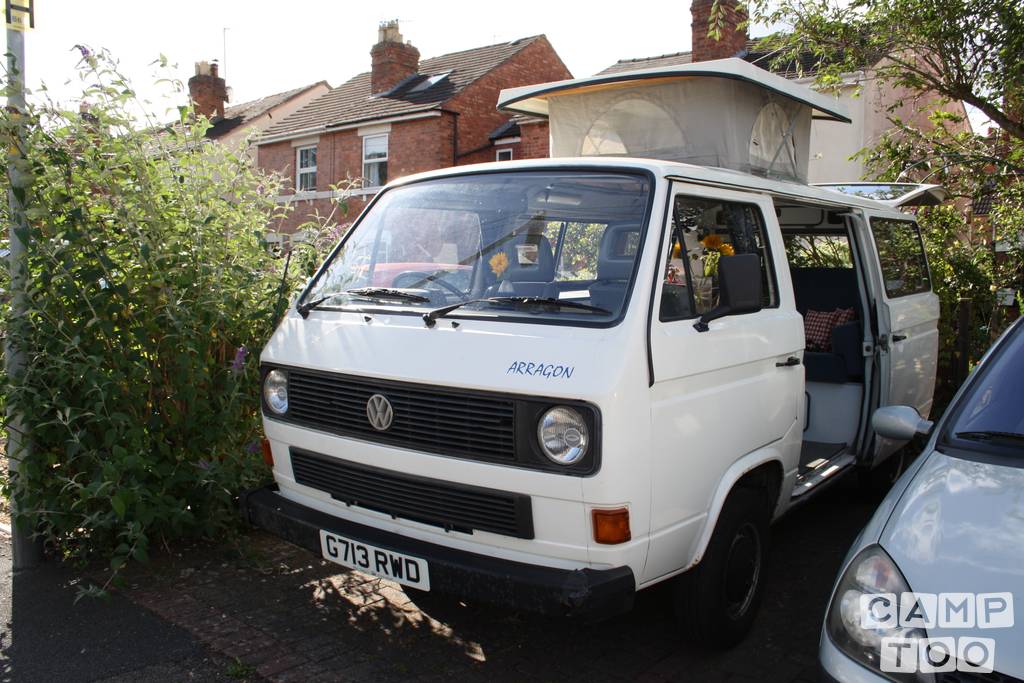 Autumn and Winter, well what can I say? Morrison is warm and cosy, he has a fan heater that is toasty when he is connected to electrical hook-up. He comes with an up-cycled fire pit with kindling and logs included. Enjoy those Autum and Winter evenings in Morrison......... We love Morrison. He came to us on a Valentines Day. Only 2 previous owners, he has not been mistreated or updated. Everything in Morrison is original apart from a new radio and CD player which incorporates a USB port. He has been lovingly maintianed and serviced, he runs beautifully, achieving approx 25 miles per gallon on unleaded fuel. He has a radiator at the front which is linked to the engine in the rear, via tubes running under the floor hence the fantastic ground clearance. Needless to say, we have not dropped his suspension. Morrison is NOT AIR-COOLED, so he will not overheat in traffic jams!!! Inside he is deceptively spacious taking on Tardis-like qualities particularly when the passenger seat is swivelled 180 degrees and the roof is up. The bed is increadibly comfortable and the Bilbo conversion roof provides an extra 2 feet headroom when erected from the inside, so if it's raining you don't get wet putting his roof up! The roof incorporates 3 zip down windows with insect screens. In some of the photos he is parked on the driveway exactly where you can park your vehicle whilst enjoying Morrison. He is a real head-turner for his 30 years of age. Naturally, he has no power steering but an enormous steering wheel and he turns on a sixpence. For our first 10 bookings we will be including a complimentary food box containing local Worcestershire produce, for you to enjoy with Morrison. What were you doing in 1990? he's been waiting for you ever since! We know you will love Campervan Morrison...we will see you on the " Bright side of the road".

Campervan Morrison is an older, distinguished gentleman. He likes to travel at around 55 mph max, which means that you get there slowly but enjoy the whole trip. Please treat him as if he was one of your own family.

Morrison is a true Gent of a campervan, owned by the nicest folks! Every part of the rental experience was easy, Kevin was available for any questions I had and is such a nice man. As a van enthusiast, it was a total privalige to be able to go camping in an original T25 in such good condition. He's been so well maintained and is clearly loved. Drives beautifully for a van of his year's and was super comfy to chill out and sleep in. Very clean, tidy van. I'd absolutely recommend hiring Morrison if you are a fan of VWs or nostalgic camping. Thank-you so much Kevin x

Kevin was a lovely, hospitable and generous host. He was very helpful and responsive and had Morrison fully decked out and looking beautiful when we collected him! Morrison ran really well on our journey to Cheltenham and back. Everything worked as it should. He was equipped with everything we needed for a comfy drive, sleep, and place to eat. He also had a lot of charm too

Had a brilliant five days in Kevin's lovely older camper. Camper ran well with no issues, but had to remember to waive at other VW campers which we met on route. Kevin could not have been more helpful, providing picnic table. chairs and parasol, camp cooker and everything I needed. Lovely comfortable bed. Just needed the surf board and The Beach Boys eight track and i would have been in heaven. Lovely way to travel.