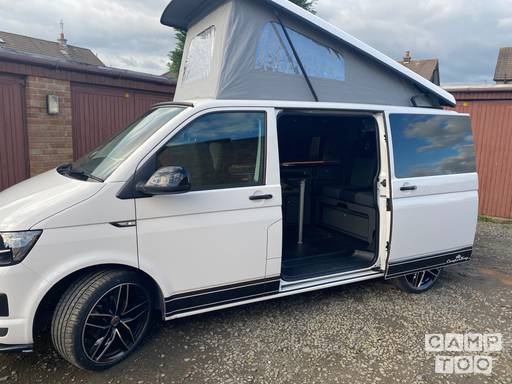 ****Just to not put anybody off please can you all dismiss Gary’s review. Happy to explain to any potential guests the full story to the untruths in this review*** Beautiful camper for use by a family, couple or group of friends. Brand new conversion finished to a fabulous standard. Tasteful bespoke fit out with lots of facilities, storage, roomy and extremely comfortable. Great machine for a country getaway!

Treat the camper as if it was your own!. I have no problem with dirt given I hope you will be enjoying yourself in the outdoors! Vehicles steam cleaned and valeted after every rental period

Barry is totally chaotic and the van was not ready when we were supposed to take over the van. So we stranded in Edinburgh without camper and with all our luggage. After putting some pressure on him we could at least deposit our luggage at him. He tried at least to organize the van as fast as possible and we could start the trip in the evening. The van is not in a good condition, many things are broken. Barry told us that he will reimburse a certain amount because we couldn't use the van the first day, and that he will reimburse the AdBlue we had to buy. But in the end he blamed us breaking the electronic panel of the lights/pump. He told us in the beginning we had to push the main switch with a screwdriver, because the button was broken. We did that but that led to a failure of the panel, now he blames us and he don't want to reimburse us. BTW he didn't show up at the agreed time to take back the van. I can't recommend to rent the van from Barry.

Just be careful if u rent this van. Everything was great until I dropped the car off. 2 days later I was contacted with photos of this excessive damage to the van, wheel buckled, tyre damage. Damage I had no clue about. Got sorted in the end,I didn't damage his car, camptoo dismissed his claim and I didn't lose any insurance money so Justice was done in the end.

We've had a very pleasant experience with Barry's Camper Van. Communication with Barry was smooth and easy. He was available and helpful. The Van was confortable ( we were 2 adults and 2 children) and easy to drive. Overall a nice first experience (despite a lot of rain... ). We'll do it again!